Cyprus – Owning a holiday home is attractive for retirement. 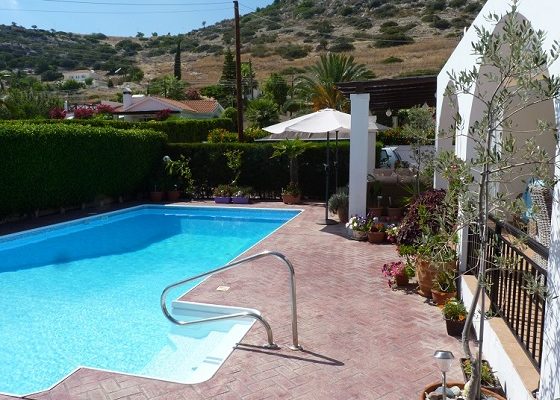 Whilst we are focussed on recruitment and Acccountancy we do have lives as well, you can read about some of the personal experiences of our team within this blog section.

Back in 2009 like many families we decided that buying a holiday villa was the right option for us, we like longer holidays and at the time I owned and ran an internet based business which meant in theory at least we could work remotely.   We went to a few shows including one at the NEC in Birmingham and decided on Cyprus as a location, the reason being that flights were reasonably priced and easily available from Birmingham airport, we are based in Telford Shropshire so that is the closest airport.  The time difference and flight times are fine also around 4.5 hours, plus my wife speaks Russian originally being from Eastern Europe, and my mother in law doesn’t speak English.  Cyprus has a large British ex-pat population but also a growing Russian one, so Cyprus ticked all our boxes on that basis.

We travelled twice to Cyprus for a week each time, and arranged to meet a large number of Estate Agents and developers,  we travelled all around the island and decided that the Paphos area, and Coral Bay / Peyia in particular was our favourite, it was the location that fitted most closely to the criteria mentioned above.   There is or was an issue in Cyprus at the time which is Title Deeds, in the UK we used to buying a property and either getting the deeds straight away or having our Mortgage provider hold them as security, in Cyprus only around 10% of properties have the deeds available, the rest issue a document called specific performance, this means you have the right to receive them in the future.  But if a previous owner goes bust you never get them meaning there is always the risk of the loss of ownership, for example if the originally developer fails the Deeds never move from them and their creditors.  For this reason its not easy at all to find a property you like and one that has its Title Deeds available.

At the time we thought that we were making the most of the Global Credit Crunch and purchased the villa in Coral Bay Cyprus, believing  we had caught the bottom of the property market.  However we soon discovered that the market dropped further and the Bank of Cyprus our lender to got into difficulties.   They moved to block the withdrawl of deposits, fortunately at that point we had the mortgage and less than the cut off limit in our account with them, but it was a near thing.

In hindsight we should have offered less and haggled more with the seller, we had spent two weeks looking at nothing but villas and really liked the last one we saw so didn’t want to let it fall through.   However the purchase was a long term one and with the aim of retiring to the sun firmly in mind.

There are many good things about Cyprus:-

You can elect to be taxed at 5% on your retirement income above a personal allowance (around 3,500 Euro) which if you have good UK pension savings is a very attractive option.

So our plan is to sell up in the UK in around 10 years time, managing my capital gains as best as I can then to retire on my various pensions. 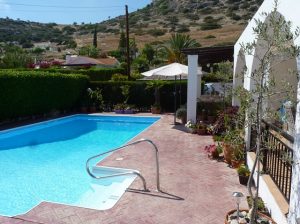 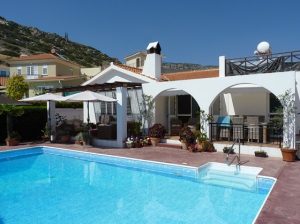 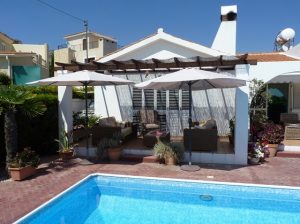 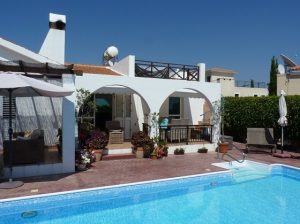 Hopefully you can see the great quality of properties that are available at reasonable prices even today. 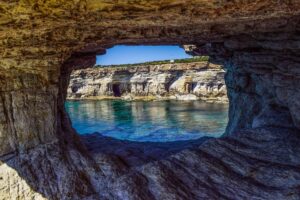 We’ve only stayed over summer holidays so that doesn’t count, but we did visit in January to do redecorating and found the whole of Coral bay and most of Peyia was boarded up and something like a ghost town off season.  There is very little work opportunity unless you are prepared to clean pools and we discovered that the internet was expensive and really slow making working remotely in 2008-2010 period impracticle, its no doubt improving all of the time.  If you can speak Russian and have a EU citizenship its easy to get work in Real Estate, so my wife would be OK but not me!

Electricity is really expensive as are cars (which have a 100% import duty on them), so even 10+ year old cars are expensive compared to the UK.

Water is cheap as is Council tax our bill for rates and refuse was Euro 189 for the year 2009, compared to more than £2K per year in Telford.

Food prices are about 30%-40% higher than in Shropshire UK.

What the situation will be when Brexit is finally through I have no idea of, however a lot of residents are from Ukraine and Russian which suggests that it isn’t such an issue if you are from the EU or a non EU Country, but you can only stay 90 days without a local resident permit if not an EU passport holder.

We are renting the villa out at the moment as I sold my Internet businesses and now work with FD Capital, we plan to start returning to Cyprus for summer holidays and anyway a sunny retirement has always been the plan!

The latest intelligence suggests that post brexit, UK citzens can apply for a “Pink card” which is the name given to the local resident card, to be eligible you need:-

Inclidently digital nomads are finding this arrangement popular as it means you can establish your tax residence in Cyprus and tax advantage of their low rates of Corporation tax.

If you are considering a Cyprus villa purchase, you are always welcome to call for a chat and we can find your a Full Time or Part-Time FD at the same time!

We can recommend the following video